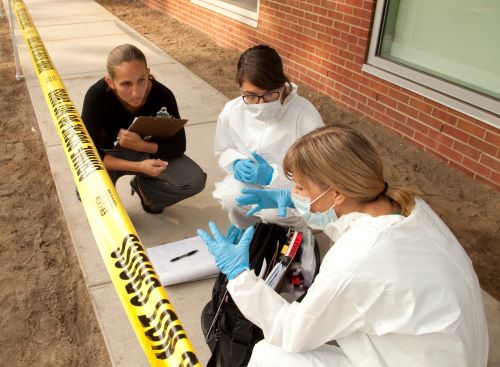 LIVONIA, MICH. - Madonna University students will be in northern Michigan later this year to compare methods of enhancing bloody fingerprints and other impressions recovered from human skin while the body decomposes, thanks to a grant the Forensic Science department received from the National Institute of Justice.

The $253,010 grant, to be used from now through December 2021, will fund a team of eight Madonna University undergraduate forensic science students and faculty members Jessica Zarate, M.S., assistant professor, and Jodi Lynn Barta, Ph.D., professor and chair of the Forensic Science program to travel to Northern Michigan University’s FROST (Forensic Research Outdoor Station) this July and December to collaborate with FROST Director Jane (Wankmiller) Harris, Ph.D., and her student researchers.

The research will further explore the utility of the Zar-Pro™ Fluorescent Lifters, which are used to successfully recover bloody fingerprint impressions from a deceased person’s skin. The research will also compare traditional chemical enhancement methods over a two-week interval, with the goal of optimizing procedures to collect this vital evidence and to eventually have these methods adopted into casework.

Zarate, who is also the inventor of Zar-Pro™ Fluorescent Lifters, explains the team wants to debunk preconceived notions that blood impressions are not stable enough on the skin of decedents (deceased people) to be recovered. Preliminary trials using Zar-Pro™ Fluorescent Lifters have enhanced and recovered impressions from decedent skin after five days of decomposition, with the impressions having identifiable ridge details that can be used as evidence in case of a crime.

“This grant project is also part of the NIJ Future-Focused Workforce Initiative,” Zarate stated. “Providing a unique opportunity for student-researchers to be employed by the Madonna University Forensic Science Research Facility (MUFSRF) while being exposed to laboratory practices and hands-on field work using novel methods in forensic science.”

Not only will students obtain hands-on experience enhancing and lifting impressions in the field, they will also gain valuable laboratory experience. Students can continue to do assessments on the recovered impressions to see how they age over time, explained Dr. Barta.

“That’s the beauty of these grants,” Dr. Barta says. “We are grateful that we can develop so much research data, which allows us to carry on projects for years for students. There is so much research potential.”

This grant, “Assessing Methods to Enhance and Preserve Proteinaceous Impressions from the Skin of Decedents during the Early Stages of Decomposition while Examining Environmental Variations across Seasons,” was only one of two in its category awarded to a university in Michigan this year.

As detailed in the grant, human skin is the most likely surface on which blood and other body fluids will end up during a violent crime, but it is one of the least studied surfaces for recovering impressions. If the victim dies, the body is often moved to a medical facility before impressions can be enhanced, which decreases the chances of recovering quality impressions.

While methods such as Zar-Pro™ Fluorescent Lifters and traditional chemical enhancement methods such as dye stains to enhance blood impressions have been previously used on human skin, “a comparative analysis between these methods has not been conducted” to date, according to the grant.

When the students’ research is complete, the optimized method will be field-tested by the Wayne County Medical Examiner’s Office in an effort to better recover impression-based evidence from decedent skin. “The research and implementation of this project has the potential to increase the recovery of evidence associated with violent crimes from human skin,” according to the grant.

Learn more about the grant and the National Institute of Justice here.