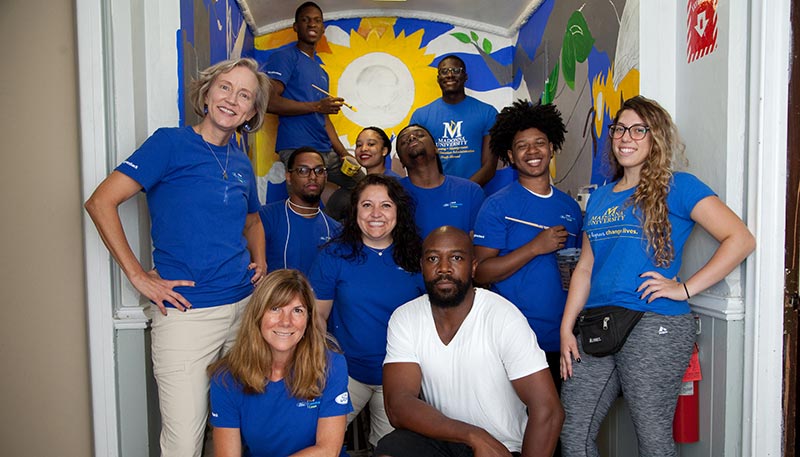 The goal of the mural project was for the students to interact with members of the St. Peter’s community in order to design and paint a mural that would reflect all aspects of the community. Students in Madonna’s Broadcast and Cinema Arts program chronicled the project on video.

The church has a community garden and runs a soup kitchen, Manna Meal. The parish house adjacent to the church is nicknamed the “Social Justice Hive”, because it provides office space for many social justice organizations. The Coalition on Temporary Shelter (COTS) got its start at St. Peter’s. Current organizations include We the People, which advocates for water rights in Detroit. The space at the end of the main hallway of the social justice "hive" is the site of the mural. Given its nickname, the team incorporated bee imagery into the mural to symbolize the activity of the parish and office members in the wider community.

The key to the project's success was the input from Detroit muralist, Hubert Massey. Ford Community Corps covered the cost for the artists, student volunteers, and materials.

All participants had input, but it was the Madonna students, working closely with Robin Ward, who brought the design to life. While some of the students were art or graphic design majors, there were creative students from a variety of academic majors who worked on the mural. The design elements included:

An event to bless the mural, watch the “Making of the Mural” film, and celebrate the collaborative project is planned for Saturday, November 3, from 10:30-12:30 at St. Peter’s Episcopal Church in Detroit. Watch our website for event details.