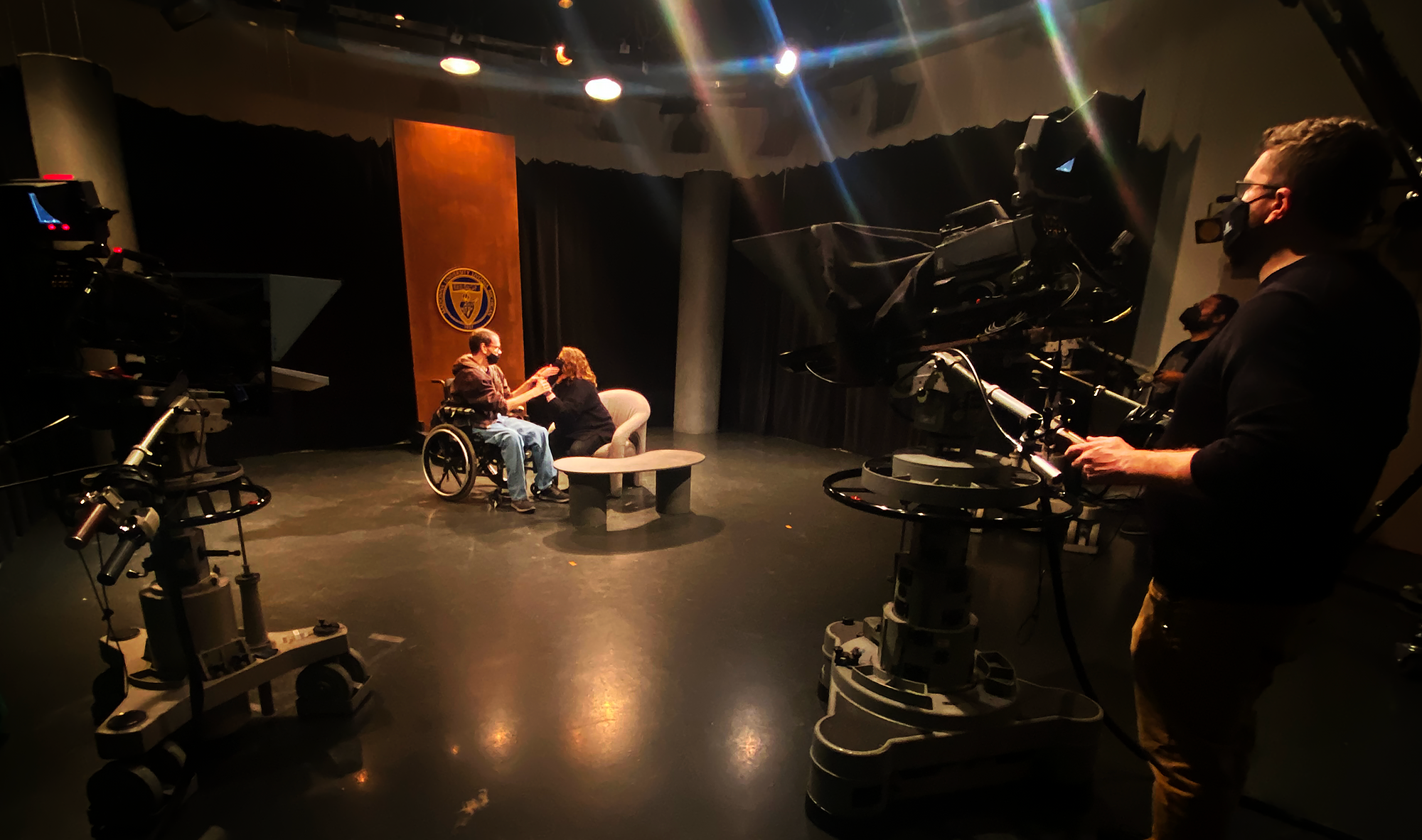 LIVONIA, MICH. – During the Fall Semester 2021, members of the broadcast and cinema arts (BCA) and the sign language studies (SLS) departments collaborated once more on an annual project for SLS third-year students. For the project, each SLS student interviewed a member of the Deaf community in the television studio “Oprah style.” The interviews were conducted fully in American Sign Language (ASL) and lasted 15 minutes. The SLS students were required to use appropriate broadcast language and interviewing techniques (in ASL); manage the logical thread of the discussion; and, juggle the demands of multiple cameras and filming cues. BCA students filmed the segments, working in collaboration with SLS students and faculty.

During COVID, many of the interviews have been conducted via Zoom, so that masks aren’t required (facial expressions are important for ASL). The following unique interview required the use of the TV studio.

SLS student Shelby Carpenter interviewed a Deaf guest, Joshua Bryant. Bryant is Madonna student who lives on campus. He is DeafBlind, and a wheelchair user.  He uses “tactile ASL” because he has extremely low vision. This style of signing requires that he place his hands on the hands of the other person, which enables him to read sign language using a combination of vision and touch.

To conduct the interview, Carpenter and Bryant sat knee-to-knee in the television studio (pictured above). The BCA students adjusted their typical filming techniques to adapt to the difference in communication mode. The interview was filmed using a multi-camera arrangement in the style of a live, filmed, television show (the camera shots were mixed live during the filming, not edited later).

This annual project offers benefits for both student groups – introducing new challenges to their established skillsets. Over years of interviews, SLS and BCA have documented the stories of numerous prominent Deaf community members locally and nationally. Past guests have included Deaf Actors Garret Zuercher and Daniel Durant. Durant currently stars in the AppleTV film CODA alongside Marlee Matlin.

The lives of DeafBlind people are often left unexplored and this interview with Bryant will provide insight into his life experiences. Unfortunately, he has decided to leave Madonna after this semester.

SLS Program Chair Danny McDougall expressed his gratitude to Christopher Nickin and Dan and Sue Boyd, who so warmly welcomed the SLS faculty and students to the BCA department.