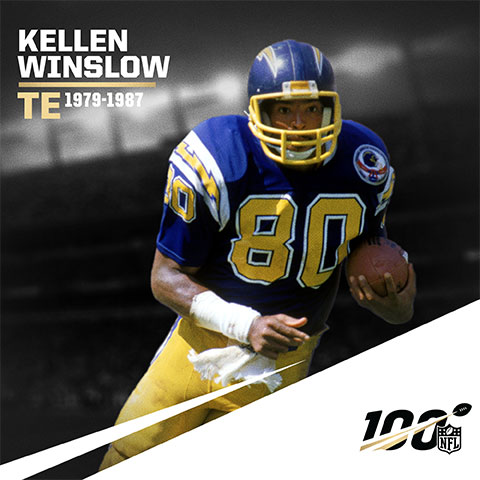 The other four players to join Winslow on the All-Time Team were Mike Ditka, Tony Gonzalez, Rob Gronkowski,  and John Mackey.

Winslow, who joined Madonna University as a part of President Michael A. Grandillo’s staff in 2015, retired from the NFL in 1987 and was inducted into the Pro Football Hall of Fame in 1995.

“We are proud of one of Madonna’s own receiving such prestigious recognition” said Madonna University President Michael A. Grandillo, Ph.D.

A first-round selection of the then-San Diego Chargers with the 13th overall pick in 1979, Winslow quickly became one of the premier tight ends of his era. During his nine-year career, Winslow led all NFL tight ends with 541 receptions, 6,741 receiving yards and 45 receiving touchdowns. The Missouri University alumnus led the NFL in receptions twice, 1980-81 and was a 3-time 1,000-yard receiver; the fourth most such seasons by a tight end in league history.

A native of East Saint Louis, Illinois, Winslow was named first-team All-Pro three times and is a member of the 75th Anniversary All-Time Team as well as the NFL’s All-Decade Team for the 1980s. A five-time Pro Bowl selection, including four straight from 1980-1983, Winslow’s most memorable moment came in the 1981 AFC playoff overtime win over the Miami Dolphins when he had 13 receptions and a blocked field goal in the contest. He finished with 166 yards receiving and a touchdown in the 41-38 victory to send the Chargers to the AFC Championship game.

“It’s humbling to be considered for this team, but, I know for a fact, if not for my teammates, coaches, and the San Diego Chargers organization I would not be on this list,” said Winslow.