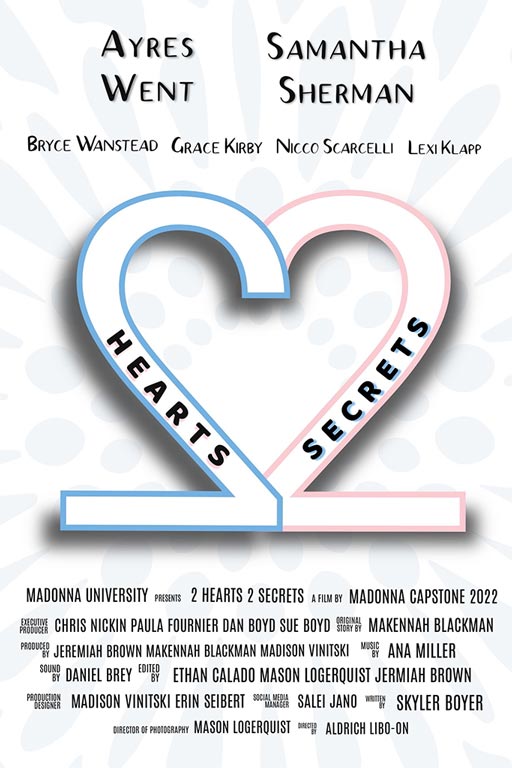 Livonia, Mich. – Madonna University, a top-ranked regional university in the Midwest by U.S. News & World Report, announced today that its Broadcast and Cinema Arts (BCA) students will host a premiere of the film 2 Hearts 2 Secrets. The red-carpet event will be held at the Historic Penn Theater (760 Penniman Ave, Plymouth, MI 48170) this Thursday, January 19, 2023, at 6:00 p.m.

The film, fully written and crewed by Madonna’s Capstone class, chronicles when college baseball player Jax meets Daisy, an infectiously energetic radio host at his university. Starstruck, the two fall in love, but each harbors a secret. Will their secrets keep them together or pull them apart?

The 50-minute film will begin promptly at 6:45 p.m. A question and answer session with students and staff will begin immediately following the film.

“This film has been a year in the making, and the amount of care and hard work that our students have put into 2 Hearts 2 Secrets is nothing short of incredible,” said Suzanne Boyd, interim director of Madonna’s BCA Program. “We developed a truly hands-on program because we want to give our students every opportunity to learn about all aspects of broadcast and cinema arts - the fun stuff, the hard stuff, and everything in between. I am very proud of what they have put together this year and the incredible strides that this program continues to make.”

Madonna University’s Broadcast and Cinema Arts program prepares students for exciting careers in television, radio, filmmaking, video, media, and internet production. Within this program, students don’t just study the art of broadcasting and filmmaking, they create it utilizing the same equipment used by top professionals in the industry.

A total of 11 films have been created by students thus far, with one recent film (Married on a Monday) available on Amazon Prime Video.

It all began with a legendary TV veteran
The program was originally started in the 1970s at Madonna University's main campus in Livonia, Mich. by Detroit broadcast veteran Chuck Derry (WXYZ-TV). Since then, Madonna students have had the ability to produce, direct, and crew our WYMD-TV television show, “Celebrate Michigan,” visit Hollywood to meet industry professionals, work with Emmy-winning reporters, and make a yearly full-length feature film for their Capstone project.

Liberal arts education, career preparation, and service learning have been the hallmarks of a Madonna University education for 85 years. In addition to the beautiful main campus, conveniently located at I-96 and Levan Road in Livonia, Madonna offers academic programs in Gaylord, Macomb, and online in Haiti and the United Arab Emirates. Michigan’s most affordable, independent Catholic liberal arts university, Madonna offers more than 100 undergraduate and 35 graduate programs in the Colleges of Arts and Sciences, Education and Human Development, and Nursing and Health, as well as the School of Business. Learn more at madonna.edu.