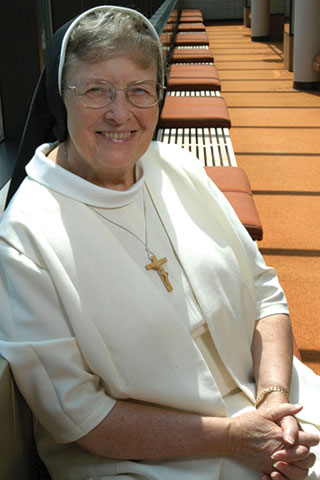 Sr. Rose Marie served as the University's sixth president from 2001 to 2015. Her legacy of exemplary scholarship, compassionate service, and dedication to Madonna's mission and values will live on in all who were blessed to know her.

A detailed obituary and summary of her legacy can be found below.
A video tribute to Sr. Rose Marie

The Most Reverend Allen H. Vigneron, archbishop of the archdiocese of Detroit celebrated Sr. Rose Marie's funeral Mass on Tuesday, January 3, 2023. A recording of the funeral Mass will be posted on the University's website when it becomes available.

Jane Kujawa was born in Detroit on January 29, 1943, the sixth of seven siblings of Francis and Anna (Rakoczy) Kujawa. She entered eternal life December 29, 2022 at age 79; 62 years in religious life. She was preceded in death by her parents and siblings Helen Hampton, Francis Kujawa, Mary Lou Koziel, and Rosemarie Kujawa. She is survived by her sister Laura Colasinski, and brother John Kujawa, and by nieces, nephews and grandnieces and grandnephews.

After attending St. John Cantius Grade School and Felician Academy, she was accepted into the Felician Congregation in 1960, received the name Sister Rose Marie and pronounced final vows in 1968.

She earned her bachelor’s degree in mathematics at Madonna University in 1966 and taught for 12 years, at St. Valentine, Bishop Borgess, and Ladywood High School. In 1976, Sister was assigned to Madonna College where she taught mathematics and organized and taught the first computer courses. She also assisted in the Planning and Development Office.

In 1979, Sr. Rose Marie began 17 years of service as academic vice president and was instrumental in introducing the first graduate program in 1982, a joint venture of the nursing and business departments.  Sister also chaired the task force promoting the change of Madonna College to Madonna University on February 11, 1991.

She also spent six years as Provincial Secretary of the Felician Sisters of Livonia, and prior to her passing, she served as local minister of Presentation of the Blessed Virgin Mary Central Convent in Livonia. She received her master’s and Ph.D. from Wayne State University.

Sister Rose Marie Kujawa was appointed sixth president of Madonna University on July 1, 2001, a position she held for 14 years. She took a hands-on approach to her work as evidenced by her efforts to create distance learning degree programs and partnerships in China, Haiti, and the United Arab Emirates; she also joined students and faculty members on a service-learning pilgrimage to Lourdes, France.

Her commitment to academics resulted in the growth of academic programs to 100 undergraduate and 35 graduate offerings. A tireless advocate for making a Madonna education accessible to more people, Sister Rose Marie fostered the expansion of study abroad programs and focused increased attention on diversity and programs for underserved populations. Her dedication to serving others compelled her to establish the Haiti Educational Leadership Program, which has graduated more than 70 students since 2014.

During her tenure, retention improved by eight percent, enrollment grew from 1,500 students to 4,500, the University’s first doctoral program (the Doctor of Nursing Practice) was launched, Madonna became the first independent university in Michigan to be awarded the Community Engagement Classification by the Carnegie Foundation for the Advancement of Teaching, the Graduate School moved to smartly renovated suites, and two new laboratories — Nursing Simulation and Sign Language Studies — were built to enhance student learning through creative uses of technology. Science laboratories have been substantially increased and improved to facilitate more research projects, and the media center now houses the latest high-definition, digital television and radio studios, and editing suites.

Under her steadfast leadership, the University completed a $50 million comprehensive campaign that brought to fruition the Franciscan Center which is Livonia’s first LEED-certified building at the Gold level.

Sister Rose Marie also was instrumental in adding acreage and buildings to the 97-acre campus and creating a top-level Athletic Complex. More than $40 million in capital improvements were made to the Livonia campus during her presidency, which provided “green” windows in the Residence Hall, and beautified the grounds with sculptures, landscaping, and gardens. Other improvements include expanded scholarships, the launch of the First-Year Experience program, more service-learning projects, and innovative outreach programs in Macomb and Southwest Detroit.

She was extremely active in Livonia and surrounding communities, serving on the Livonia Chamber Board, and working with the Rotary Club and the Livonia Symphony. A trustee and executive board member of the National Association of Independent Colleges and Universities, the Michigan Catholic Conference, and chair of the Association of Independent Colleges and Universities of Michigan. She also served on the boards of Sacred Heart Seminary, Orchard Lake Schools, St. Mary Mercy Hospital, and Michigan Colleges Alliance. She was inducted into the Livonia Hall of Fame in 2014. Whatever her role, Sister Rose Marie always looked at the bigger picture and stated many times that any contributions she was able to make were a result of great teams around her.

After retiring as President at Madonna June 30, 2015, Sister discerned yet another call to service in the Archdiocese of Detroit, where she served for over five years as the Delegate for Consecrated Life.

Among the honorary degrees and honors bestowed on Sister Rose Marie over her 60 years as a Felician Sister, one stands out:  the PRO ECCLESIA ET PONTIFICE medal – “For Church and Pope”.  On Sunday, March 21, 2021, Sister Rose Marie received this rare papal honor awarded by Pope Francis for six decades of selfless ministry and service to the local and universal Church.  The medal, established by Pope Leo XIII in 1888, was bestowed on Sister Rose Marie by His Excellency, Archbishop Allen Vigneron, during a prayer service at St. Colette Parish in Livonia, Michigan.

A devoted leader and role model, Sister Rose Marie’s collaborative spirit and passion for excellence have inspired and challenged many.  Well done, good and faithful servant.  Rest in peace.