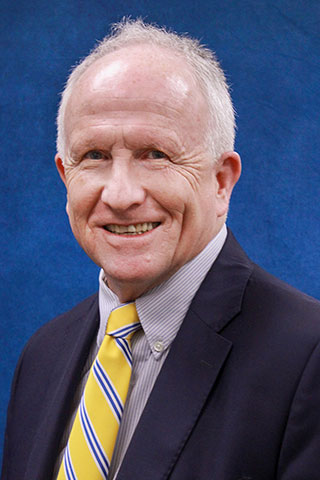 In accordance with the University’s Presidential Succession Plan, the Board of Trustees has approved the appointment of Ian Day (pictured at right) as acting president of the University, in addition to his role as chief operating officer. This change also is effective today.

“I am honored to have been chosen to lead Madonna, a truly remarkable university, whose Felician mission and Franciscan values have earned it a reputation of distinction for a quality education and a commitment to serving others,” said Day about the appointment. “As higher education institutions everywhere face enormous challenges, my leadership approach remains one of inclusivity and transparency with our exceptional students, faculty, and staff.”

“The Board of Trustees looks forward to continuing its relationship with Ian Day in his new role as acting president,” said Board Chair David J. Boyd. “We are confident that he and his executive team will build on the University’s nearly 85 years of success.”

When Day joined the Madonna family in mid-2020, he brought with him some 30 years of experience in higher education. In the past two years, he has helped guide the University through the pandemic, overseen the completion of the Welcome Center and other facility improvements, and provided support and leadership to the enrollment management team to aid in recruiting and retaining students, among other achievements.

Prior to Madonna University, Day led the enrollment division at Canisius College, a Catholic Jesuit institution in Buffalo, NY, where he and his team matriculated the most diverse class in school history and increased total headcount 14 percent in 2019. During his 10 years at the University of Massachusetts Dartmouth (UMD) he served as chief enrollment officer and as director of athletics.

He also spent some time at Tiffin University, in Ohio, in a variety of roles including, vice president for campus services, director of athletics, and director of admissions.

Day holds a bachelor's degree in education from Alderson Broaddus University and a Master of Science in Management from Purdue University.

A lifelong Roman Catholic, Day grew up in Aldridge, England. He and his wife Sarah, reside in Grosse Pointe Farms, Mich., and have three children, Justin, Haley, and Evan.

As Grandillo retires, the University community expressed its gratitude for his seven years of service to Madonna University, and acknowledged the many milestones and accomplishments that were achieved under his leadership, including the following highlights from his recently published Report of the President:

Grandillo expressed his gratitude to the Madonna University community. “Nancy and I are thankful to the Felician Sisters and the Board of Trustees for the opportunity to serve such a great University, with outstanding faculty and staff members,” Grandillo said. “We are in the high calling to change people’s lives through the power of education. I think we did that. I am particularly grateful that my life partner, Nancy, joined me on this journey. Her devotion to Madonna students was evident and appreciated.”