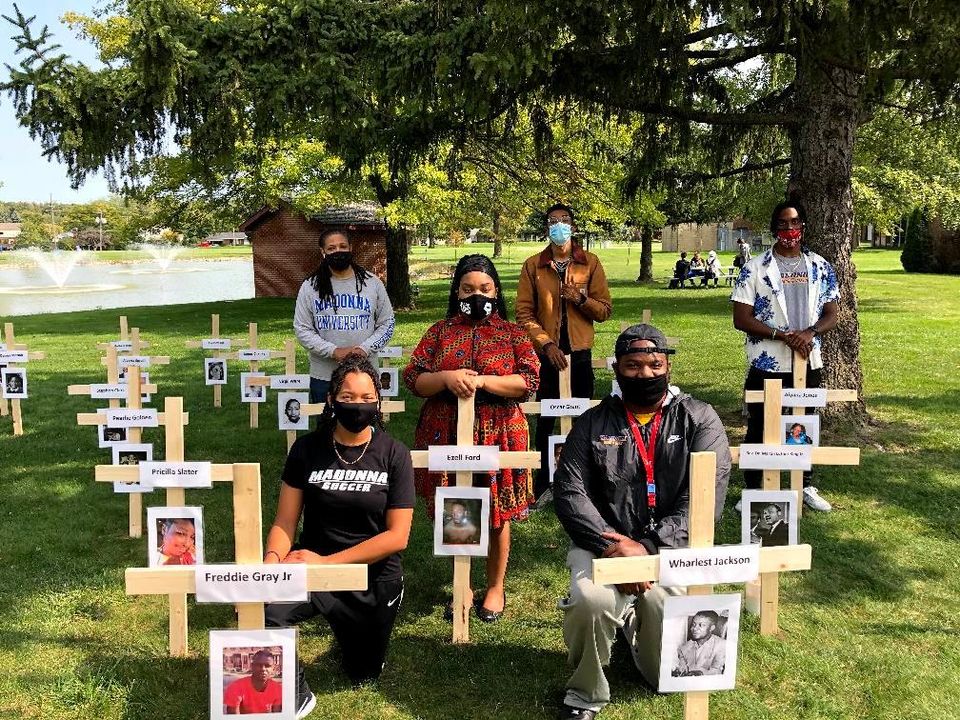 LIVONIA, MICH. - Several members of the Madonna University athletics department joined members of the Black Student Union and Campus Ministry to install a Black Lives Matter Memorial near the Franciscan Center on campus.

To create the Memorial, more than 50 crosses were assembled and driven into the ground, each bearing the name and photograph of someone who lost their life to police brutality or vigilante violence; more than 50 people who must be remembered.

Coordinated by Jesse Cox, director of Campus Ministry at Madonna, the Memorial highlights the struggles of the most vulnerable in our society. “It was meant to inspire all of us to be allies who make changes in our lives, and who advocate for change and justice in our communities and in our country,” Cox said. “Having this memorial on campus demonstrates the Madonna community's commitment to living out its Franciscan values of respect for the dignity of each person, and peace and justice.”

Cox said the Memorial, which will be up through the month of October, was installed in just a few hours thanks to help from members of the Black Student Union, and student-athletes representing football, volleyball, men's and women's basketball, soccer, women's lacrosse, and men's and women's track and field.

“As a department we want our student-athletes to have a productive way to be involved and express their voice,” said Madonna University Athletics Director Scott Kennell. “We were excited to be able to get involved with this memorial and to bring more awareness to the injustices happening in our country. We are committed to making a difference and will continue to look for ways to be involved and be a part of the change.”

A prayer service is planned for Wednesday, Sept. 30, at 12:05 p.m. at the Memorial, for students, faculty, and staff members only, in compliance with current Stay Safe guidelines. (In the Franciscan Center if it rains.) The prayer service also will be shared live on Madonna's Facebook page.

The University will loan the Black Lives Matter Memorial to interested organizations or businesses in the community, for the month of November, and then again beginning in April of 2021. Any group interested in borrowing the Memorial for a month, should contact Campus Ministry at CampusMinistry@madonna.edu, or 734-432-5839.